The endangered Mountain Gorillas of Uganda won’t be found in any zoo in the world (they do not survive in captivity and there are no surviving mountain gorillas in zoos), you can only find them and see them in Africa, in the countries of Uganda, Rwanda, and the Democratic Republic of Congo. According to census data released by the Uganda Wildlife Authority November 2012, – there are only about 880 some Mountain Gorillas left in the world and over 400 of those live in Bwindi Impenetrable Forest alone plus those of Mgahinga Gorilla Park in Uganda, East Africa. 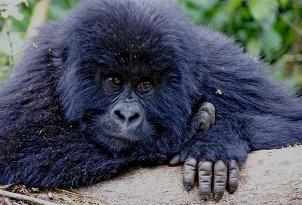 Say the word Gorilla and one’s mind will come up with all kinds imaginative images from King Kong to some Tarzan movies. The Mountain Gorillas were not even known about by westerners until 1902. Rwanda was a German colony when a Captain von Berenge was climbing Mount Sabinyo on the Rwanda side with some friends and they were at the 9300 foot level and camped when a group of Mountain Gorillas was spotted and he shot two of them but could only retrieve one. It was a young male about 5 years old, 220 pounds and not too large, but larger than any apes the German had seen. Bones and skin were sent to Berlin where it was identified as a gorilla.

No one had thought that gorillas could exist in such a high and much colder climate than West Africa. The news of these gorillas drew hunters to the area, especially the Congo where they shot or captured Mountain Gorillas. Prince Wilhelm of Sweden shot 14 mountain gorillas in a 1920-1921 expedition to the area.